A History of Hard Work & Integrity

The honest, hard-working values that made Frank Goodhart, Sr. a success have been passed onto his sons, grandsons and great-grandsons. Today, as our project locations take us to all parts of the continental United States, Canada, Europe, Mexico, and South America, our quality and service remain the same as when we started fabricating for our Lancaster County neighbors more than 85 years ago.

In the late 19th century Frank G. Goodhart began his career as a sheet metal worker in a small two-man shop located in downtown Lancaster, Pennsylvania as an apprentice. 37 years later he founded the company that bears his name. The unique feature of his career lies in the fact that he worked out his apprenticeship in the same building and in the same business before purchasing it from John E. Pohl in 1935.

Goodhart Sons Through the Years

Frank Goodhart, Sr. enters the workforce as an apprentice under John E. Pohl in a small two man shop on Cherry Street in downtown Lancaster, PA.

Frank Goodhart, Sr. purchases the company that today bears his name. The unique feature of his career is that he worked out his apprenticeship in the same building and in the same business before purchasing it from John E. Pohl.

The bulk of the work during this time was in light gage sheet metal with contracts coming through industrial firms, both within the city and throughout Lancaster County, Pennsylvania from customers such as Hamilton Watch Co., Hubley Manufacturing Co., Dodge Cork, Keystone Bag and Burlap, Winstead Tobacco and Fulton Bank as well as a job at Franklin And Marshall College to carry acid fumes from the laboratories.

Goodhart’s continued success and growth necessitated more fabrication space. In 1963 the company was relocated from Cherry Street in downtown Lancaster, Pennsylvania to a larger facility along the Manhiem Pike. Contracts for lighter gage ductwork continued to grow along with requests for ventilation hoods as well as other miscellaneous fabrication and weldments.

Congress passed the Air Quality Act / Clean Air Act. This created a new market when Western Precipitation began looking for a fabricator east of the Mississippi River. This opened the door for the Goodhart’s to move into fabricating with heavier steel and larger ductwork systems. The Clean Air Act also inspired the need for fabricators of baghouse, precipitators, RTO’s (Regenerative Thermal Oxidizer) and incinerators for various industrial markets. Goodharts developed a reputation for being able to deliver a quality product in a short amount of time and was seen as a reliable source to meet the needs of the industry.

In order to keep up with this new demand, the fabrication facilities along the Manheim Pike were expanded twice. In 1970 it was determined that further expansion at this location was no longer feasible and more floor space would need to be acquired. The fabrication facilities of E.F. Bordt & Son along the Harrisburg Pike in Lancaster, Pennsylvania was purchased to accommodate the need for additional shop space. Operating fabrication at two locations proved to be challenging but manageable.

Goodhart’s continued to expand their market share in the pollution control business for many of the major players in the field. At this same time the need for larger installation crews became evident as Armstrong World Industries contracted Goodhart for the fabrication and installation of new production lines, dryers, pollution control equipment and bulk handling systems. Continued market growth in 1971 required even more shop floor space. In 1971 the entire Goodhart operation was moved to its present day location along Horseshoe Road in Lancaster, Pennsylvania. At the time, this included two buildings that housed the general offices along with the fabrication and machine shops.

The Goodhart Installation team was expanded to include millwrights, riggers, welders, pipe-fitters, electricians and insulators. They also began to travel throughout the United States installing pollution control equipment that was fabricated by Goodhart’s as well as many types of OEM equipment and production lines. Eventually they traveled overseas to perform complex installations.

In 1974 Goodhart’s fabricated seven baghouse systems for Armstrong World Industries and was awarded the contract for installation as well. The Goodhart Project Installation team got creative and employed helicopters to move the baghouses into place saving both time and money.

Growth in business meant more growth in fabrication floor space was needed. In 1975 an additional crane bay was added and in 1979 two entirely new buildings were added to the facilities. One building was built as an additional fabrication shop while the other building was designed and built as general offices. Additional buildings were leased nearby including a 57,000 square foot building in the Conestoga Industrial Park and two crane bays along Old Philadelphia Pike in Lancaster County, Pennsylvania.

In 1980 Goodhart Sons, Inc. was awarded a contract to fabricate, assemble and test 50 foot wide by 80 foot long hovercraft for the Alaskan DOT. The purpose of the hovercraft was to deliver vital supplies to residents of southwest Alaska in the tough winter months when the temperature drops below zero and waterways freeze solid.

A Move Into Larger Markets

Throughout the 1980’s and 1990’s Goodhart Sons, Inc. expanded into other markets as they began fabricating conveyors, tanks, chutes and structural steel. Also during this time they became heavily involved in the fabrication of larger incineration systems and the complete installation of production line. They also moved into the can industry which consisted of the fabrication of Pin ovens and IBO ovens. This naturally led them into the installation of the ovens plus the remainder of the can equipment supplied by other various OEM’s. The fabrication side of the business continued to see growth into even heavier fabrication such as heat exchangers, large stacks, pressure vessels, and large diameter ductwork for power plants. At the same time, Goodhart Sons, Inc. expanded into the food industry including dryers for Frito Lay and large capacity mixing tanks for many of the major chocolate companies.

Both Frank and Dick Goodhart retire from the day to day operation of the company. Frank passes his presidency onto Gary W. Goodhart and remains on as Chairman Of The Board.

In October of 2008, Goodhart Sons announces a succession plan for the 4th generation of family management. After a combined 40 years of working at Goodhart Sons in varied positions, Marc and Chad Goodhart assume their new positions in management. Marc becomes President of the Fabrication Operations and Chad becomes President of the Installation Operations. Each take direct operational control over the two major operations of the company. Gary Goodhart, their father and former president for several decades, shifts into the role of CEO.

We treat others as we wish to be treated.

To one another, to our customers, to our community, and to our faith.

We respect time and always have a deadline in mind. We are proactive and not reactive.

Goodhart Sons is proud to be led by the 4th generation of the Goodhart family, an accomplishment only 3% of family-owned businesses achieve. Meet our team of owners and leaders who keep Goodhart Sons focused on providing innovative solutions to our customers. 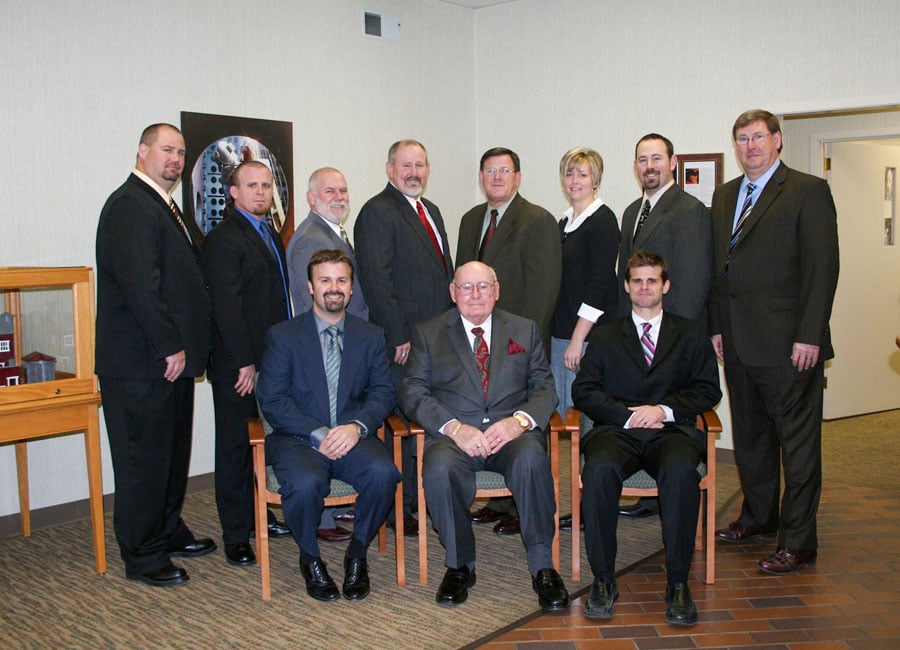